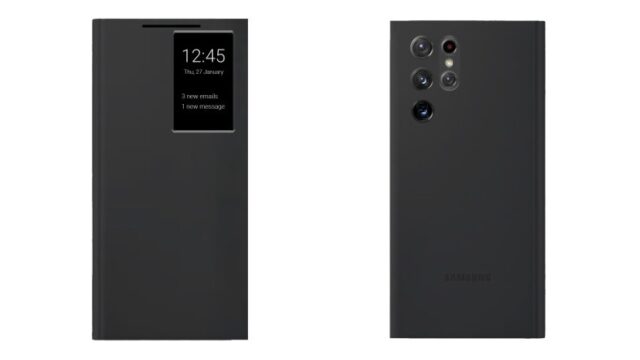 Third-party retailers are now stocking up on official Samsung Galaxy S22 cases. Once again, this confirms the inevitable truth that Galaxy Unpacked is just around the corner, and Samsung fans will soon be able to purchase the latest flagships, regardless of whether or not they’ve made a reservation.

A few dozen Samsung protective case models designed for the Galaxy S22 flagship lineup are now listed online at third-party retailer MobileFun. A handful of cases are even accompanied by renders, which may not be official, but in theory should reflect Samsung’s final design choices.

The retailer lists official Samsung frame covers, leather covers, standing covers, silicone covers, etc., sans photos, along with their purported launch prices. So far, so good, but more unusual is the fact that the Galaxy S22 Ultra — which is an odd device in its own rights — could be getting a redesigned Smart Clear View case.

The Galaxy S22 Ultra is not your average Galaxy S flagship. It’s fundamentally different than other Galaxy S devices before it because it has a built-in S Pen holster and adopts a squarer design akin to the Galaxy Note 10.

This new design language also appears to have persuaded Samsung to rethink the established design of the Smart Clear View case. Therefore, instead of a narrow transparent window that runs across the case’s flip cover, the redesigned Smart Clear View case for the Galaxy S22 Ultra features a rectangular cutout in the upper-right corner.

The cutout looks large enough to fit the camera housing of the Galaxy Note 20 Ultra, although it obviously serves a completely different purpose. It provides a preview window to the AOD (Always-On Display) clock, notifications, and so on. Subjectively, it doesn’t look as elegant as the previous Smart Clear View case design for the Galaxy S22 Ultra seen below, which, at this point, may or may not even exist.

Either way, Samsung appears to be taking every opportunity it has to highlight the fact that the Galaxy S22 Ultra is not your usual Galaxy S flagship. Change is coming, and it’s coming fast. Samsung will unveil the Galaxy S22 series on February 9 at Galaxy Unpacked, and prospective buyers can already register their interest in the device in exchange for exclusive benefits and pre-order bonuses.